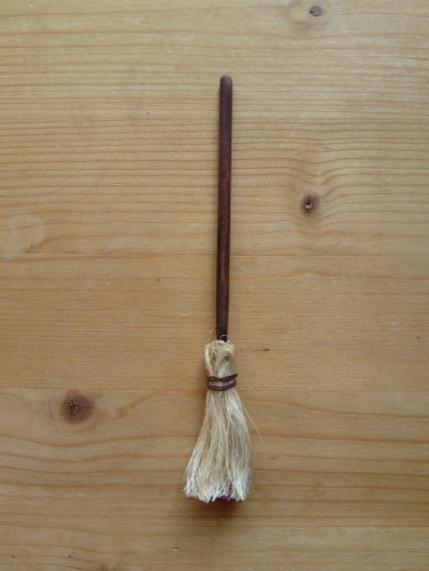 This week I’ve achieved more than any other week on this project so far. I don’t work well with deadlines, so didn’t officially set one for myself, however, I knew I wanted to finish the shop before Halloween. Amazingly it seems as though I’ll actually be able to reach that goal!

Apart from embroidery, I’ve also been working with wood and clay this week as well. First up is this very simple broom you see below. After the time consuming intricacy (which I actually enjoy in measured doses) of the wall hanging, this piece was mercifully simple and quick to put together.

For the handle I used an old paintbrush. After sanding all the paint off, I used water colour to darken it. While the handle dried, I moved on to the bristles. I chose a springy rope, the advantage being that the fibres are very rigid, and will not bend easily (to make a mop, I would have used a floppy piece of rope instead).

I measured the rope against the paintbrush, making sure it covered the metal part of the brush. After marking that spot, I folded the rope, with the mark as the midpoint, and cut. This rope has a memory, and even when released, the place where I folded still retains a kink. I separated the fibres in small clumps, refolding them and dabbing a bit of super glue at the fold.

To attach the bristles to the handle, I applied super glue all around the metal part of the brush, then placed the bristles over it, clump by clump. Once I’d done a complete circle, I added a band of glue to the first layer of bristles, about 1 cm from the top, and made a second layer. To give it a finishing touch, I glued a few coils of dark brown thread close to the top of the final layer of bristles.

Now for the ladder. As it happens, I had already made a ladder a while back (as seen in the last picture), but I was not happy with it, so as with the cabinet and table, I decided to make a better one. I think the most problematic aspects of the first ladder are its colour, texture, and the construction. Basically everything is wrong with it, is what I’m saying. It looks nothing like wood, or even a ladder for that matter.

The work table I remade last week opened my eyes to the possibilities of working with twigs. For my new ladder, I selected two slim laurel twigs of roughly the same thickness, and a third long but thinner piece for the rungs. After cutting six rungs, I removed the bark from all my pieces, and left them to dry out for a few days.

Once dry, I sanded everything, then used a screw to bore shallow holes at regular 3 cm intervals along both long twigs. I then used a knife to taper both ends of all the rungs so they would slot into the holes. taking one side of the ladder I applied a drop of glue to each of the holes, then quickly inserted the rungs. Taking the remaining side of the ladder, I once again applied glue to each hole, and slotted the free ends of each rung into place. When the glue dried, I painted the ladder with several coats of dark water colour.

you can see the difference between the new ladder and the old one below. 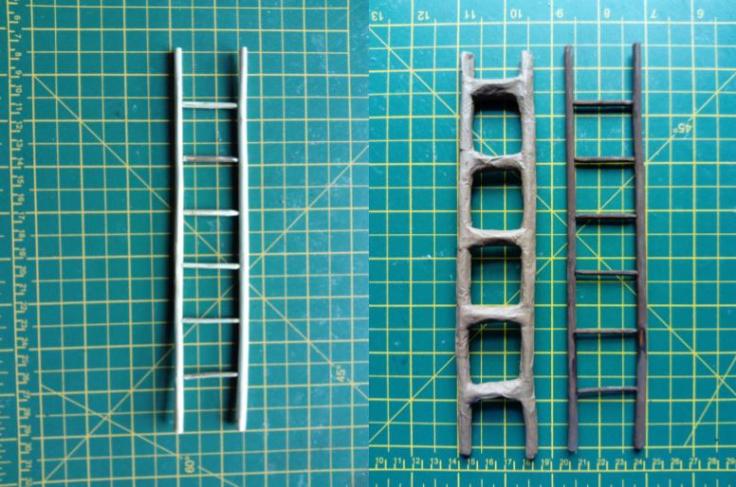