The time has come to make glass jars! I spent ages thinking about how to make them without resin, and finally came up with a solution. I like to save all kinds of odds and ends, and among those things I found a plastic punnet, as seen below. I’m not sure what it was originally for but the important thing is that it has a smooth surface, which is key for this project.

After cutting away the sides of the punnet, I measured and cut strips to make the jars. In this case I cut a strip 1.7 cm x 5.5 cm (but some of them were wider). Next I applied super glue to one edge, overlapped it with the other and clamped the join with some pliers. I tied an elastic band around the end of the pliers so I wouldn’t have to hold them shut, and left it to dry for about 20 minutes.

Once the join is secure, I move onto making the base of the jar. Using a piece of card 1 mm thick, I traced around my plastic cylinder to get the shape of the base. It’s best to use sharp scissors to cut the card, but in this instance I used my craft knife, which is why I got slightly jagged circles for the base and the lid.

At this point the base will not fit yet, as I traced around the outside of the cylinder, and we want it to fit inside. So, trimming the edges carefully, and seeing if it fits after each trim, I got it to fit tightly inside one end of the cylinder.

For the lid, I traced two more circles from the cylinder and cut them out. One I left untrimmed, and with the other I trimmed it as I had the base, but just a little more, so it would fit closely, but still open and close smoothly. To secure the two lid pieces, I simply applied glue to the larger circle, and placed the other circle on it as centrally as possible.

I painted both the base and the lid dark brown to mimic wood. To attach the base, I put glue around the thin edge, then slid the cylinder over it, using the back of a pencil to make sure it lay flat at the bottom of the cylinder.

The Jar is ready to be filled and labelled once the base is glued on, in this example I used cinnamon bark broken into small pieces to be cinchona bark, an ingredient that apothecaries would have used in the 18th century.

I made a whole shelf’s worth of these jars, but wanting to add a bit of variety, I also used two other types of glass jar, though not made from scratch. As seen below I used some old travel cosmetics jars, replacing the lids with cotton covers and filling them with fresh things like lemons or leeches (both made from air dry clay).

For my last set of jars, I used tiny glass bottles that I’d found at Hobbycraft as part of a beading kit. They are perfect for my top shelf and I filled them with a mixture of dry ingredients and liquid tinctures (made from shampoo). 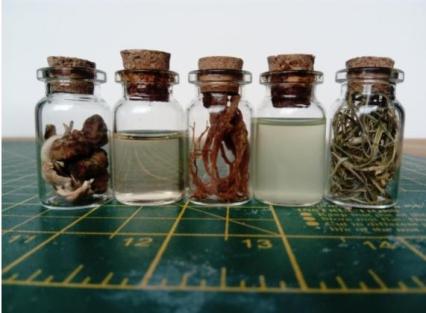